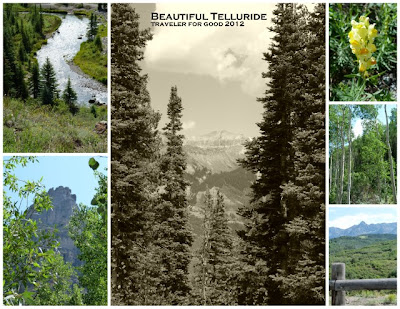 Here's a bit of random country music trivia for you.     On Tim McGraw's 2001 album Set This Circus Down he recorded a song called "Telluride."   It was not released to the radio.  I only know the song because I owned the CD (back when we bought CDs, you know).    When I moved to Colorado in 2005, I heard it played every once in a while.    Apparently since it's a song about Colorado, the radio stations here can/do play the jam.   Who knew?
It probably also explains the local love of the song "Colorado Christmas" by the Nitty Gritty Dirt Band.   I'm pretty sure that one didn't make the cut when I lived in Nevada or Indiana.
But I digress.  I finally made it to Telluride in August after almost 7 years living in Colorado.   Every person I talked to said that this part of the state (Telluride and Ouray) were beautiful.    No lie.
The pictures above a just a glimpse of the natural beauty of western Colorado.   Enjoy.  ﻿

Handcrafted for your enjoyment by Jenni at 7:24 AM

Email ThisBlogThis!Share to TwitterShare to FacebookShare to Pinterest
Labels: colorado