Counting Down to the Caribbean 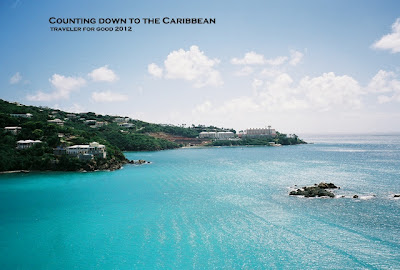 I love the anticipation of an upcoming vacation.  It's almost as much fun as the trip itself.   That's why I always have something on deck.  Earlier this year, a friend asked if I'd like to go someplace warm later this year.    I suggested a cruise, and before she had time to think too much, we booked the trip.    It's been 7 years since I've been on a real cruise.     I don't consider the few days that I spent on the Louis Cristal in Greece "real."  It was a way from point A to point B, but not really a vacation in itself.
My upcoming adventure has four ports of call - and since I picked the itinerary, I picked two new ports (and countries) to add to my list:  Cozumel, Belize (new!), Honduras (new!) and Grand Cayman.
A cruise really is a way to vacation on a budget if you plan it that way.    Here was my approach:
1.  Paying for the cruise up front in cash back in May.   I earned some prize money at work and decided that rather than just putting it my checking account and hoping that I did something memorable with it, I would put it right away towards something awesome.   It's an interior cabin, but really, I'm only going to sleep there.
2.  Free hotel nights in Tampa, the departure port.   Yay for job perks!
3.  Paying for the airline tickets with my debit card.    I bought two one ways at good prices on two different pay days.   Spreading it out helped me pay with cash and resist the temptation to put it on a credit card.
4.  Food.  The nice thing about a cruise is that your food is included.   Yes, you need to budget for alcohol and what you eat on the islands, but for the most part, you're covered.
The last thing I need to settle are the shore excursions.   I'm pondering using Viator for some of them if the prices are better than the cruise line.   Shore excursions are definitely a way for the cruise lines to make money, but logistically it often is easier than planning a detailed activity on your own.
﻿

I can't wait!!! I haven't made a paper chain, like my sister and I did for Tanzania or Greece, but the excitement is still there and I'm counting down the days.

Recommendations for excursions for my ports of call?  Let me know!
Handcrafted for your enjoyment by Jenni at 4:00 AM