Last night, I had another CCE "Colorado Cultural Experience." This my 3rd time living in a state with a lot of ski enthusiasts (WI and NV being the others). However, this is the first place where I've heard my friends talk about Warren Miller. Every year Warren Miller Entertainment releases a new ski/ride movie. Known for great footage, scenery and music, many people consider this event the start of the winter season. I went with a group of 10 or so friends to see Children of Winter. The theater was packed, they were raffling off great prizes, and everyone who attends gets a free lift ticket or BOGO for Copper/Winter Park. If you click on the graphic, you'll see where else the movie is showing and the trailers. Not surprising that most of the showings are in the Rocky Mountains, West Coast, Upper Midwest and Northeast. There was 1 showing in Ft. Lauderdale, FL and 2 in Houston, TX. If you live in Georgia, Louisiana or South Carolina....sorry, no movie for you!

Now all we need is more snow...
Handcrafted for your enjoyment by Jenni at 4:01 PM No comments: Links to this post 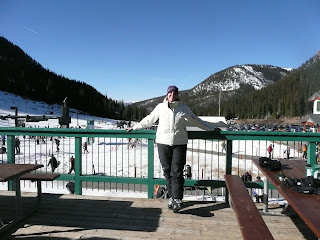 Yesterday I went up skiing for the first time this season. This is something new for me, as the past 3 winters in Colorado, my first trip of the year is usually in January, and my pass lies dormant for a few months. There hasn't been much snow recently, so only 2 runs were open. There is nothing better than a sunny day in the mountains, whether it's taking your first run of the day, or relaxing on the sun deck with drink in hand. This is your cue to motivate and start doing the winter sport of your choice!
Handcrafted for your enjoyment by Jenni at 3:51 PM No comments: Links to this post

What Fits in a Shoebox?

What gifts would you put in a shoebox for a child somewhere else in the world? At church we're participating in Operation Christmas Child. You pack a shoebox full of non-perishable gifts for a boy or girl in a specific age group, pray for him/her, and send the box on a trip. Unless I get a letter back, I'll never know where it went or who got it. Will it travel by rickshaw, camel, or boat?

Safe travels to my little shoe box, and may it end up in good hands.
Handcrafted for your enjoyment by Jenni at 7:52 PM No comments: Links to this post

Yet another addictive travel game for when you want to spend a few minutes pointing your mouse over a map of the world. Do you know where Burkina Faso is?

My friend Twissted Swisster had this up on his blog today. I thought I would get a higher score. I missed another 201 countries. Naturally I'll have to try again.
Handcrafted for your enjoyment by Jenni at 9:22 PM No comments: Links to this post 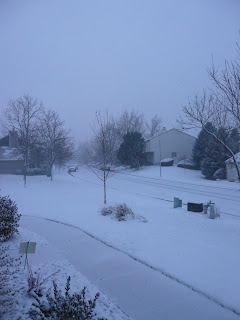 Usually this happens early to mid October. This year it waited until Friday, November 14. It didn't last all that long, but reminded us that, yet again, winter is on its way.

Handcrafted for your enjoyment by Jenni at 8:18 PM No comments: Links to this post

Last night I had the opportunity to go to Madonna's show here in Denver. Considering she was one of the artists that I grew up listening to, I definitely enjoyed it. What I enjoyed even more was that our original seats were up in the rafters with a limited view of the stage and some of the Pepsi Center reps came up and gave everyone in our section new tickets. We moved down to seats 4 rows up from the floor with a fantastic view of the stage. She puts on quite the production with dancers, video, moving stages and more. I didn't bring my camera, thinking that I'd be too far away, and a lot of times security is after you if they see you using it. Not last night. Every other person had their camera or their cell phone up taking pictures and video, so I've taken advantage of their footage on YouTube. Prior to the concert, my friend asked what song I most wanted to hear and I said "Like a Prayer." My friend's favorite was La Isla Bonita (which, surprisingly, she sang as well).

The people watching was also entertaining, a good thing since the show started 90 minutes after the 8:00pm ticket time. There was some crazy 80s fashion going on in parts of the arena as well as some men's fashion that you don't see many other places (at least in my circles....). For a woman who is 50 years old, she has a lot of energy and was dancing, and even jump roping, the entire 2 hour show!

The videos are a glimpse of "Like a Prayer" as well as a video montage I really liked with the theme of "Your Life, Your Choice."

Handcrafted for your enjoyment by Jenni at 10:59 PM No comments: Links to this post

The Joys of Hazelnut Spread

Today at the grocery store, I made an impulse buy. Shocking, I know. Even with a list, I always end up with a few other items (such as peppermint sprinkles, raspberry yogurt and 3 green bananas). I was wandering down the aisles and came upon the Nutella. It was less than $3. Now, I like Nutella, but it's one of those things that I don't think about until I see it on a menu. Downtown, Crepes and Crepes has a Nutella and Strawberry dessert crepe. Yum!

So now the question is how many ways can I enjoy it before it gets demoted to the bottom shelf of the fridge?

Email ThisBlogThis!Share to TwitterShare to FacebookShare to Pinterest
Labels: nutella

When I was growing up, I don't remember the phrase volunteer vacations. We had mission trips. As junior high and high school students, we would raise money and go someplace else in the country (via long van rides listening to someone else's choice of music) to do manual labor. Ontario, Western Colorado, Minnesota, Michigan, and South Dakota. Five summers in a row learning to roof, paint, build fences, and on occasion wearing a big yellow "God's Gang" button. The trips had many purposes and it was more for building friendships and seeing new places as doing the work.

In college I had the opportunity to do my first international trip, a week doing vacation Bible school in rural Costa Rica. I didn't speak much Spanish, but was able to have fun and build relationships with kids, just the same. Our church was big with stained glass windows. The Methodist congregations in C.R. met in open sided buildings decorated with hibiscus blossoms.

Fast forward one year and we worked in West Virginia with Appalachian Service Project.

Time passed and work trip opportunities didn't present themselves for a while. In 2005 the church I was attending in Indy had a partnership with a church outside of Playa del Carmen, Mexico. This trip was a mix of both. A chance to relax on the beach and go out to dinner, visit Mayan ruins, and volunteer at Vacation Bible School (or E.B de V en espanol). Even after moving to Colorado, I took the opportunity to go again and continue those relationships. (You can learn about this partnership through their blog and if you look on the July 2006 link, you'll even find some of my commentary).

This year, I was able to cross one more state off my list of places to visit on a short work trip to New Orleans. Our work was coordinated through PDA. Again the balance between using a crow bar and drinking a daiquiri on Bourbon Street.

Three months from today, I'm embarking on a volunteer vacation adventure with Cross Cultural Solutions. In the past year I've been trying to determine a way to spend an extended period of time in another country while still keeping my job. I want to be more than just a tourist. Having a house, dog, etc. makes it a bit more challenging to just pick up and go. I'm going to Trang, Thailand with CCS for a 3 week program. I'm not sure yet what my project will be although it seems most likely that I will be helping in a school in some capacity. It will be my first time to Asia. I'm excited about doing it on my own. I will be living and working with other volunteers when I get to Trang, but it's different than traveling with family or friends. I know I'll be keeping a journal, blogging and taking a ridiculous amount of pictures while I'm there and who knows....maybe I'll learn something new about myself.

If you're interested in sponsoring me for this adventure, click the "sponsor me" icon to the right of my blog. For more information on organizations that do good around the world, check out this article from Budget Travel.
Handcrafted for your enjoyment by Jenni at 8:53 PM 1 comment: Links to this post 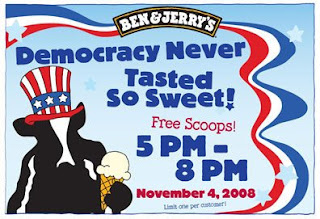 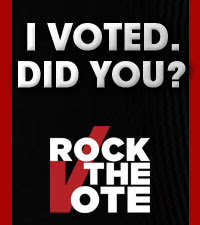 Last Monday I went to the post office to send in my ballot. In the detailed instructions from the county clerk, it say in bold and underlined that the postage would be $1.17. So the post office agent measures my envelope and says that the postage is $.56. I explain that I was told it would be $1.17. So he puts it on the scale and maybe gives consideration to the size of the envelope and tells me it will be $1. In a very unusual and unthrifty moment for me, I ask him to charge me the $1.17 so I can make sure it gets there. He told me that every person who brought in a ballot that day had said the same thing.....is there a $1.17 scam between the county clerks office and the post office?
In any case, if you haven't voted early, make sure you get out on Tuesday and make your voice heard. Depending on what state you live in, you may have the option to vote on paid time if your schedule at work is such that you won't have adequate time to get to the polls before or after work.
Handcrafted for your enjoyment by Jenni at 6:33 PM 1 comment: Links to this post

Email ThisBlogThis!Share to TwitterShare to FacebookShare to Pinterest
Labels: vote

Our Boys in France Tobacco Fund 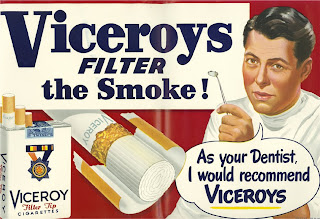 Truth in advertising wasn't an issue in the past. The Stanford School of Medicine has put together an exhibit of tobacco advertisements over the past 100 years. Aside from the occasional billboard, cigarette ads don't much of a place in American culture any more. I remember seeing the Marlboro Man on TV when I was a kid, but then tobacco ads were pulled from TV. Even NASCAR has gone the same way....the Winston Cup doesn't exist anymore.

Our Surgeon General Warnings on ads and packaging are small compared to the warnings on packages in Canada and Europe (think "Smoking Kills" in 100 point font).

Does your dentist recommend cigarettes? Maybe not, but his grandfather did. Click here to check it out.
Handcrafted for your enjoyment by Jenni at 1:57 PM No comments: Links to this post