In 2011 we went to the wedding of a cousin we had never met in Illinois.    We sat at a family table with other cousins we had never met.   It could have been all kinds of awkward.

Instead, it ended with us making a human pyramid in the reception hall.
Nothing awkward there...just the beginning of a beautiful family-ship.

In 2013 we decided to do it again.  No one was getting married...just a straight up family reunion in Colorado.

Was there another pyramid?   Yes, there was.

It's the building blocks of a tradition.   All traditions have start somewhere.   And sometimes you have to be the one who starts them.

Like no time has passed, it's 2015, and it's time to reunion again.   We continued our western leanings, this time celebrating on the California Coast in Monterey.   And for the cousins who couldn't make this trip?    We put their heads on sticks and took them with us to the aquarium and the beach so they didn't miss the fun.

For me it was a whirlwind trip across time zones:  taking a red-eye flight from Maui on a Thursday night and returning on Tuesday morning.

Here's what I did: 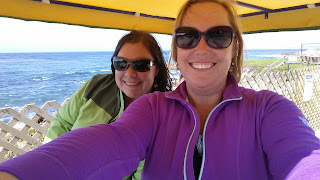 What are your favorite things to do in Monterey?
If you have family reunions, what is your tradition?

Handcrafted for your enjoyment by Jenni at 9:00 PM No comments: Links to this post

I didn't know that summer bucket lists were even a thing, but as I've been catching up on all the good things the internet has to offer, the lists are there.

After seeing Edward Readicker-Henderson present at TEDxMaui "Kill Your Bucket List", I've decided that I'm opting for a fun list instead.   Last summer I was all about the #100happydays which made me focus on something happy and good every day.

What is it about sending a message in a bottle that people want to put it on their list?  I've read quite a few lists and it showed up twice.   Hmmm.   I live on an island.   No way am I throwing a bottle of any  kind  into the ocean.   Not gonna happen.

Now s'mores on the other hand?   That can go on every summer list.   I had s'mores last weekend at our family reunion in Monterey and, as always, they were delicious.   All three of them.   Maybe four. You can't have too many s'mores?  Right? 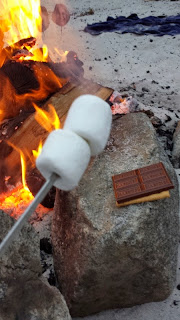 Before the thought of a list had crept into my brain, I'd already planned things that definitely fall into my Summer Fun List.    So now, I'll have two categories:  Confirmed Fun and Opportunities for More Fun.

Kauai
In my 18+ months living in Maui, I haven't made it to Kauai yet.   I was there 10 years ago, and next weekend, I'll fly over to enjoy approximately 54 hours on the Garden Isle.    I don't have many plans other than lounging by the pool and going out for ice cream.

Wisconsin
Wisconsin is actually a hotbed of summer fun.   Much more fun in the summer than in the winter.   I'll be catching up with my family in Door County and the Milwaukee area.  Cheese curds, cherries, Leinenkugel's...it's all there.

Concerts
I'm mainland bound twice this summer and concerts are tied into both trips.    I've seen Kenny Chesney every other year since 2003, and this summer will be the second time I'll seen him perform at Lambeau Field in Green Bay.   My sister and I also started a tradition (we're in the third year, so it must be a tradition, right?) of going to the Jazz Aspen Snowmass music festival over Labor Day weekend.     The lineup this year includes Hozier, No Doubt, The Fray and Lenny Kravitz.

Colorado
In addition to quality mountain and music time with my sister, I'll have the chance to visit friends and fave places in Denver.    Has my blood thinned out after living at sea level?   I'll find out.

Big Island
Ever since I moved to Maui, I've been thinking about visiting Big Island, only a hop away, to check out  the volcano.   Time to make that thought a reality.

SUP
I haven't gone stand up paddle-boarding yet.   Hard to believe, especially since I can walk down to the beach and rent a board easily.

Take a Surfing Lesson
Another opportunity that I should take advantage of here in Maui.

Hike the Pipiwai Trail
Famous for bamboo forests and waterfalls at the Kipahulu District of Haleakala National Park.   It's past Hana, so a bit of a drive from where I live, but I know it will be worth it.

Drive the Backside of the Road to Hana
I've driven as far as Kipahulu on the road to Hana and I've been as far as Ulupalakua in the Upcountry...it's time to connect the dots and see the whole road.

Take a Tour of the Hali'imaile Distilling Company
I love food and beverage tours.  Even better when I get to sample something.

Snorkel at Ahini-Kinau Natural Area Reserve
I've been to the end of the road twice.   The first time I didn't have my snorkel gear, and the second time the water was too choppy.

Enjoy the Hibiscus Iced Tea (with alcohol this time) at Frida's Mexican Beach House
Last time I was at a work function, so had the virgin version, but next time.... 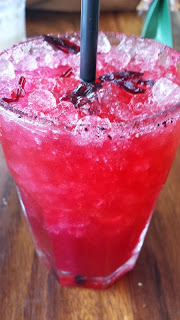 I feel like there's more to come, but for now, at least I have a start!
What are your summer fun plans?

Handcrafted for your enjoyment by Jenni at 6:54 PM No comments: Links to this post