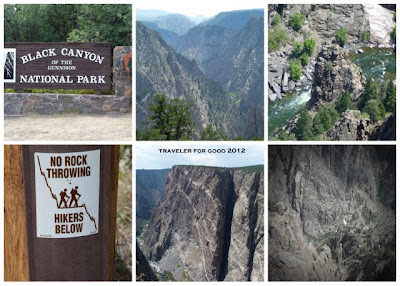 It's been a while since I've visited a new national park.   Rocky Mountain NP has been my fall back these past few years since it's easily accessible from Denver.    I used to seek out National Parks everywhere I went - both to explore America and to get a stamp in my passport.   I've been slacking as my travels have taken me elsewhere.
When I told friends I was venturing to Western CO in August, I was told more than once not to miss the Black Canyon of the Gunnison.     The running joke over our roadtrip was "What is a Gunnison?"   Our decision was that it was an unknown furry animal.   Every time there was a watch out for wildlife sign, it was because tourists should not be going around hitting Gunnisons.  It's not nice.  And it's hard on your car :)
The entrance of this National Park is unassuming.  The ranger told us that people will drive out to the park - you can't see anything of the canyon as you drive from Montrose to the ranger station - and then balk at paying the $15 entry fee and turn around and leave.    They are missing out.   It's a very dramatic and beautiful area.   I only wish we would have had time to drive down the steep hairpinny East Portal Road down to the river, but we still had a long way back to Denver after visiting the park.
The ever present sign in this park was the "No Rock Throwing, Hikers Below" on all the trails.   Obviously on twitter this would be filed under #NationalParkProblems.
What's your favorite National Park?     ﻿

Handcrafted for your enjoyment by Jenni at 5:00 AM