On Wednesday morning we left the Ngorongoro area heading for Serengeti National Park. Serengeti means endless plain in Maasai, and we saw plenty of it - lots of Thompson's Gazelles, Zebras and Wildebeest, and not a lot of trees.   In the afternoon we officially entered the park and saw more of the amazing wildlife, including getting "that close" to lions. 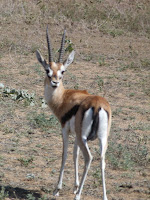 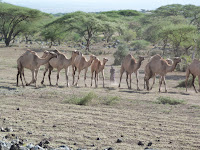 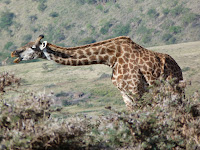 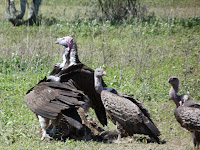 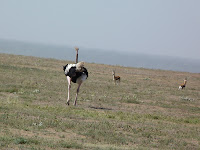 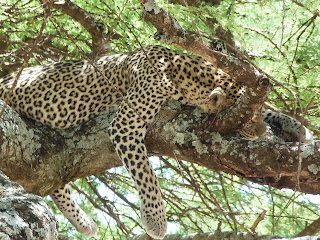 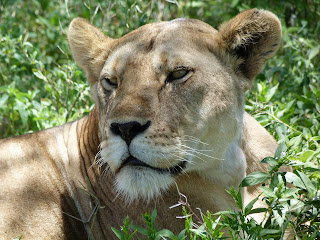 We stayed at the Serena Serengeti Lodge which is in the park.  We stayed in "huts" as the staff called them.  Since it was in the park, you needed an escort after dark because the wildlife is out and about. 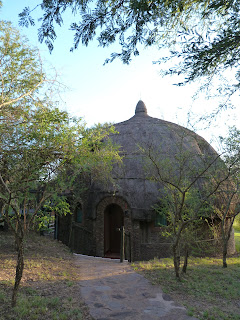 And you've got to love the infinity pool that overlooks the endless plain. 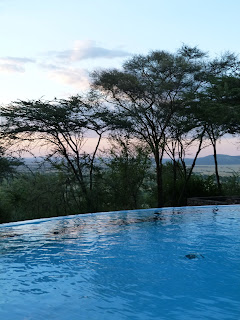 And, from the hotel staff and our driver guides, we learned how to handle animal attacks; from elephants "take off your shirt and throw it on the ground so they stomp on it, not you" to cape buffalo "lie still on the ground so it can't hook you with it's horns - if you have to, bite it in the tits" to leopard "there's no hope."
March 9 Wildlife: augar buzzard, lions, cheetah, leopard, zebra, wildebeest, Thompson's gazelle, Harte buck, water buck, elephants, hyenas, dik dik
March 10 Wildlife:  impala, zebra, wildebeest, topi, hippo, leopard, crocodile, rock hyrax, jackel, male lion (eating a zebra, no less)
Handcrafted for your enjoyment by Jenni at 9:06 PM