On Sunday March 6 we left Arusha to meet up with the rest of the group who had spent the previous two nights in Tarangire National Park.  Once we left the city, we saw very few cars, other than safari jeeps, trucks and some combis (shared minivans).  Something that surprised me was the amount of bicycles.  Some being used just for transportation, and some being used to carry multiple jugs of water or giant bags of potatoes.  This was also our first exposure to the Maasai - the pastoralist culture in both Tanzania and Kenya that follows their cattle (or goats or camels) to greener pasture.  You can't miss them, they wear plaid and carry walking sticks.   We learned a lot about their culture over our time in the country.  We met up with the other jeeps at a busy Sunday market that sold everything from shoes to fruit to souvenirs. 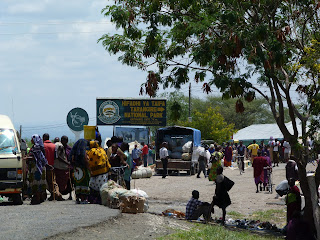 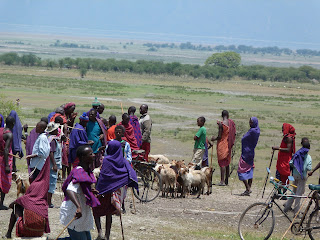 Maasai at the market
﻿After meeting up with the rest of the group, we went to the city of Babati to visit the Amka Afrika Nursery and Primary School.  This a school that the Bushdrifters helped build after determining an area where children could use a closer school.  This school building just opened in the past year, there are two class rooms and about 25 students grades K - 7. There is enough interest that they are looking at building a dormitory in the coming years so that children from farther away can attend.  We visited on a Sunday, normally a day without classes, but some of the students and their parents, along with their teachers were there to greet us - with singing.
Two more slightly longer videos of these songs are here:
Amka Afrika - Happy
Amka Afrika - Education
﻿After the singing, the students (with the help of an English speaking teacher) introduced themselves and their parents and then we introduced ourselves.  Many members of our group had brought along donations of school supplies and we were able to give them to the teachers.   Mom, just like she did the last time we were in Africa, brought her polaroid to take pictures of the kids with their parents that they could have as a gift.  In the era of digital cameras, polaroid film gets harder to find...who knows, in the future she may have to bring a cordless digital printer instead.  This was also my first day being introduced to the giant box lunches that we would eat many days.  We had so much food that we gave the kids first dibs of anything our box.  Yogurt, juice and the hardboiled eggs were the crowd pleasers. 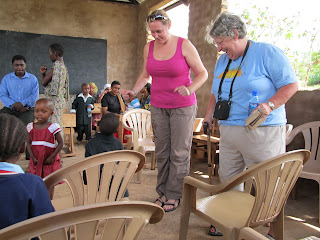 It always takes a little time to break the ice.  Food was a good start.  Playing with the digital cameras was next.  For me it always comes down to games.   I was mirroring the dance moves of two little boys until their was laughter all around.
Good times.  ﻿
Handcrafted for your enjoyment by Jenni at 10:17 PM