I am never ready for vacation to end, whether it's a weekend in the mountains or a month in Thailand.  My sister and I refused to discuss the end of vacation.   On Saturday night we had a cocktail party with our guides on the deck at the bar.   On Sunday we headed out for some serious end of vacation shopping, both in a structured store (owned locally by Tanzanians - and across from the Snake Farm) and at the Mount Meru Maasai Market in Arusha.   We stopped at had lunch at the Bushdrifters office in Arusha at a restaurant called "Island Style."  The owner of the restaurant lived in the States for a long time, but moved back with her daughter so she'd understand her African culture.  I think the Island Style comes from the fact that her husband is from Jamaica.    There was a small church nearby - a simple structure with gapped wood walls and a tin roof, but you could hear everyone singing. 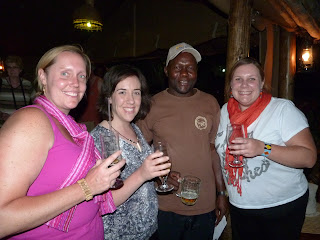 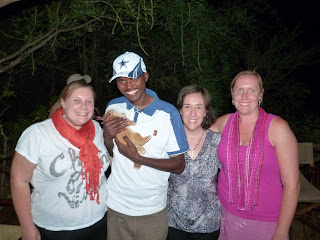 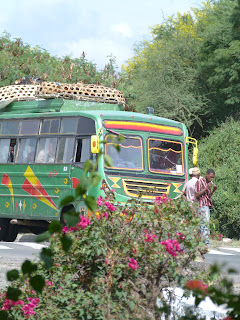 The Tanzania version of the Latin American Chicken Bus 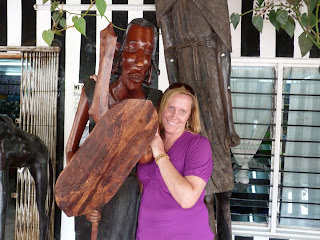 African Art.  I saw people in the airport with bulky wrapped packages that I can guarantee are wood carvings of giraffes.   Honestly, if I wanted one I'd buy it at World Market here in town and take it home in my car. 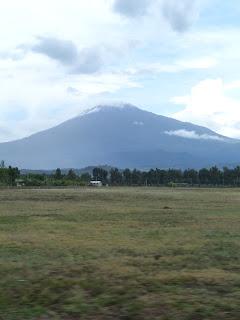 We never did see Mt. Kilimanjaro.  This is Mt. Meru.
It was dark when we arrived and cloud covered when we left.  ﻿
Random Life Lesson:  Both my sister and I spent the remainder of our cash at the Maasai Market because we knew we were going to the airport.  Surprise - none of the shops or cafes took credit cards, except the one that sold Tanzanite...and what we wanted were chips and Fanta.   And then on the opposite side of immigration were the duty free shops that did take credit cards, but only sold liquor, cigarettes and coffee.   We scored two Bounty Bars at the checkout.  Of course there was no drinking water available on the other side of immigration.  And it was hot.  The good news?  I slept almost the entire 11 hours to Amsterdam.  I don't know when I'll be back in Africa, but I know I will.
Handcrafted for your enjoyment by Jenni at 10:03 PM