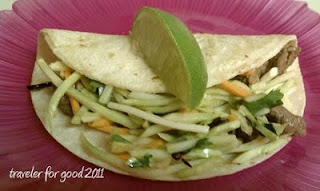 Those people who say to make a list before going to the store are right.   The weeks where I look at recipes in advance, plan at least a few meals, and buy the right ingredients are the weeks when my sister and I eat well.  The rest of the time?  It's cereal, cheese and crackers, or name that leftover.   The original recipe came from the April 2007 issue of Cooking Light.

A quick note about ginger:  I don't buy it very often and I was tempted by the ease of jarred pickled ginger, like what you would get with sushi.  However, a small piece of real ginger root is significantly cheaper - and has a great flavor of its own.

Here's my modified version - it went perfectly with the semi-finals of America's Got Talent.

Combine all beef ingredients and put in a ziploc bag and marinate for 20 minutes in the fridge, turning occasionally.    Saute beef in a skillet sprayed with cooking spray until browned on the outside (a little pink on the inside is fine - or cook until browned all the way through).   To make the slaw combine all ingredients and toss until well combined.   Divide the beef up and top with slaw.  Serve with a lime wedge.
Handcrafted for your enjoyment by Jenni at 8:00 AM