Yesterday a lot of eating and drinking went on.  My friends and I walked to brunch at Toast in Cherry Creek.   There was the added bonus of a homemade cappuccino if I got to Capitol Hill a little early.  It was beautiful morning to walk through the neighborhoods en route to the restaurant.  We passed the restaurant for the Waffle Brothers, who I see at the farmer's market, but didn't realize they had their own place.   That will have to be another trip.   The two mile walk each way helped to justify the food madness pictured below.  I enjoyed the corn beef hash eggs Benedict with a side of nutella french toast.   The term "side" is a misnomer at Toast - they are huge.  Case in point: the gravy cakes. 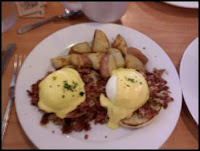 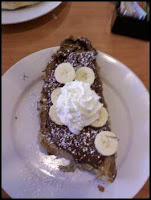 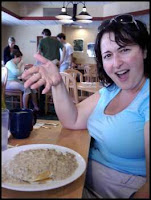 And if brunch wasn't enough, it was easy to persuade my walking companions to show me the new frozen yogurt place they've been visiting, Yogurtland on 5th and Grant.   It was a novelty to me.  They have 10-14 self-serve flavors and you pay by the ounce for your yogurt and toppings.   I tried a sample of the chocolate coconut, but selected coconut, tart peach and mango for my actually "lunch." 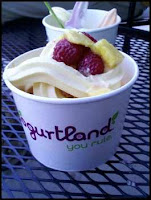 Coffee.   I bought coffee beans from a coffee shop in Antigua, Guatemala, called Kaffee Fernando's.  For the past two months they've been sitting innocently in my cabinet.  I don't have a coffee grinder and was not in the market to buy one.  I thought I'd ask a friend if I happened to be going their way, or hope that the ARC or Goodwill would have one.  I had a feeling that King Soopers wouldn't approve of me bringing my beans into the store and using their commercial grinder.    So yesterday when I was heading downtown to visit friends, who I knew had a coffee grinder and were going to make me cappuccino, I actually thought ahead.  I asked if I could bring my beans and use their grinder.   Instead, they told me that they had two grinders - one that was better for the espresso drinks that they make, and a second one that would be better for the drip coffee that I make.   And would I please take it off their hands?  They also offered me one of their three unused fondue pots, but since I have two of my own, I declined.  They explained that they were actively trying to give away some of their belongings, both as the practice of giving gifts and also to reduce the amount of stuff.    Now that I have added a coffee grinder to my household, I have a pile of donations growing outside my bedroom, including towels, paperbacks, and clothes.   Who knows what I can find to give away?

Beer.  I don't drink beer, or even think of it on a regular basis, but yesterday on KYGO, my favorite country station here in Denver, they said "Think of any situation in your life.  Add beer.  You now have the makings of a country song."   Instead of adding beer, I'll think sangria or margaritas.  The result is the same.

I will now try and compose a lyric or two of a country song about my former lack of a coffee grinder:
"It was a hot summer night - we were feelin' right - We was sitting on the patio drinking sangria - me and the girls.  Thinking of the rough mornin' to come - after havin' so much fun - I was in a bind.  I will have coffee, but no way to grind."

Pick your life situation.  I anxiously wait to hear your lyrics.
Handcrafted for your enjoyment by Jenni at 6:50 PM