That One Time I Won a Radio Contest 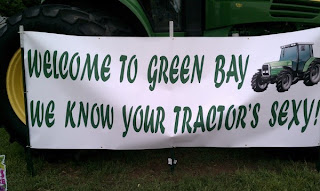 Based on my highly scientific calculations, I have seen him every other year since 2003.    2003 was the first year (I think) that he had gone a little island style...pretty sure the tour was called Senoritas and Margaritas.   Definitely a sign of things to come.    I still remember my senior year of college and "She Thinks My Tractor's Sexy" being on constant radio play to the dismay of my non-country-loving friends.

Getting to that one time I won a radio contest.

It was not this year.    I don't usually try to win, but a few weekends ago they were giving out tickets to the sold-out Luke Bryan and Florida-Georgia Line show.    I know what the cue to call sounds like and had the number programmed in my phone.    I was close.   A real person told me I was caller 7.   But sadly, I was not lucky number 12.

But I did win Kenny tix in 2009 for knowing my jams.    It was one of those music montages with about 10 songs in it.   I owned that one and did a victory dance in my bathroom while getting ready for work.

The moral of the story:  You can win concert tickets.    Your odds might be a little easier if you're playing a game that has right or wrong answers versus being the lucky caller.    On the flip side, the lucky caller doesn't have nearly the chance of sounding stupid on-air for being wrong.

And if you wonder who the tall blond girl on the upper deck is who is singing along at the top of her lungs?   Well, that will be me.

Handcrafted for your enjoyment by Jenni at 7:00 AM