Three Museums for Under $10 in Albuquerque

I can't say that we planned to hit any museums on our New Mexico road trip, but it happened.   As we were waiting to take our ghost tour, we saw a sign about the Rattlesnake Museum.     We didn't know that was even an option. 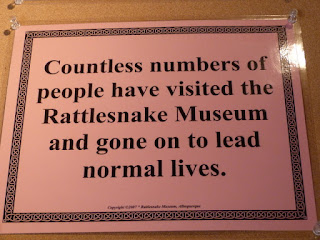 But how can you not?   I don't know if there is another such museum in all the world.   And it's small.   You've spent $5 on coffee or ice cream, so why not spend it to learn about snakes that are unique to North and South America?

﻿
Prior to hitting the Rattlesnake Museum, we spent a cool air-conditioned hour at the Balloon Museum for a big $4.    Since we weren't there during the Balloon Festival, it was an opportunity to learn about the history of hot air ballooning and about the festival itself (I think I read that it is the biggest international sports festival in the world...or something like that). 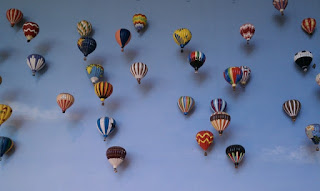 Just when we thought that we were done we discovered while waiting in line to take the tram up Sandia Peak that they house the New Mexico Ski Museum.  And it's free!  It's also really small, so you probably wouldn't seek it out unless you were planning to take the tram.    And there is a chair for photo ops.  Who wouldn't want a photo?

There you go.   Some quick, easy, affordable museums that won't tax your attention span while still allowing you to learn something.    You'll still have money for ice cream.  Or margaritas.

Handcrafted for your enjoyment by Jenni at 6:23 PM