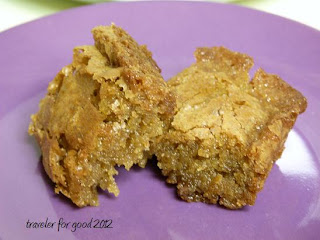 First, a shout out to my co-workers who gave me a gift of colored plates for my birthday.   So many more options for my food photography.   And possibly more treats for them too.

This recipe is courtesy of Lauren from her blog Keep It Sweet and it was featured as a guest post on A Culinary Journey with Chef Dennis.    I followed the original recipe as posted...except for some modifications due to a lack of cinnamon chips.

Where have all the cinnamon chips gone?  (You can sing this Peter, Paul & Mary style.  Go ahead, try)  This recipe calls for cinnamon chips and my local King Soopers doesn't have them.   In talking to a friend about this baking crisis, she said that she would see them in the stores when she lived on the East Coast.   She also said she has a hookup in the ability to get any Hershey's product she wants.  Including these.   I admit that I didn't check more than one grocery store, so it could be that there are cinnamon chips in Denver, but that I didn't look hard enough.    So I doubled the amount of cinnamon in the recipe from 1/2 teaspoon to a full teaspoon and was not disappointed.

The other ingredient of question was toffee bits.   Now, sometimes I see the bags of Heath or Skor bits, but I don't know if that's what was originally intended.  And I couldn't find them the day I was at the store.  Can you buy toffee bits without chocolate?  So instead I bought a bag of Heath miniatures (actually cheaper per ounce than buying a 6 pack of regular size bars) and chopped up 20 of them which provided about a cup of toffee bits.

Are they really Chewy Gooey?  Yes.  So much so that gettting them out of the pan, even lined with foil and sprayed with cooking spray, took a little effort.  And I was impatient, wanting to try them while they were still warm.   Lots of love from my friends on the ski trip for these.   And when I left Breck on Sunday afternoon I left the remainder for the crew staying until Monday.   Why?  Keeping them out of my kitchen so that I don't sabotage my attempt at healthier eating more than I already have.

Cinnamon Toffee Blondies - Second Batch
My sister scoured a couple different grocery stores, finally finding both cinnamon chips and Hershey's Bit O' Brickle at an Albertsons on Mississippi.   I made a second batch, partially as a bribe to one of her friends and the other for her office (not bringing any to my office, since we're just one month in to a three month weight loss challenge).   These were even better than the first batch.  I baked them for about 40 minutes and WOW!
Handcrafted for your enjoyment by Jenni at 9:32 AM