In late November I ate at Euclid Hall for the first time.   In mid-December, I went back again and took my sister for some "crafted" food before hitting the DCPA for the Broadway revival of West Side Story (which was awesome....I was mentally singing along the whole time!).    The food does not disappoint, and this time, it was light enough for me to take pictures. 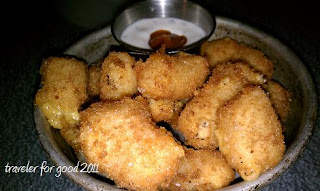 Hello appetizer!  Growing up in the fine state of Wisconsin, we take our cheese curds seriously!
A lame frozen mozzarella stick is not the same.
Served with buffalo ranch for dipping. 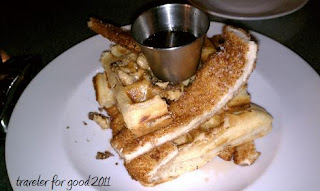 My first time ever having Chicken & Waffles.
The chicken was pounded flat and had a light crispy coating...so savory
in contrast to the waffles and maple syrup. 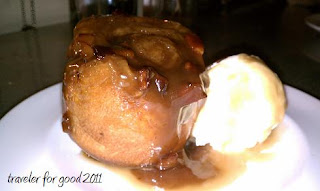 And when cheese curds and chicken and waffles aren't enough, I ended this culinary
adventure with the Bacon Sticky Bun.   I'm struggling with the proper
adjectives to describe the caramel sauce studded with bacon. ﻿
Just do it.
Handcrafted for your enjoyment by Jenni at 1:39 PM