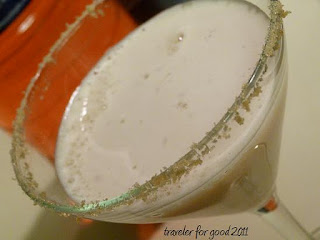 You know she's a good friend when she sends you a message that says "I drove by a sign for pumpkin spice martinis....you need to look into this."   There is a limited time of year that you are able to find pumpkin liquor.   I went to Cornerstar, which is a huge liquor store, assuming that if anyone had it, they would.   Did you know that you can find gingerbread and caramel apple liquor this time of year?  Neither did I, but it's in the same aisle as sloe gin...and Bols Pumpkin Smash.   I had never heard of Bols, but they've been around since 1547 (where, I don't know).   The staff at the liquor store appreciated my sense of adventure commenting that the bottle will last forever and that I can always cook with it if I don't drink it.   Based on popular response yesterday, I don't think I'll have to worry about finishing the bottle this holiday season.

Yesterday I was helping host a baby shower, which had a fall theme, so I brought the ingredients and we served them in shot glasses and espresso cups for sipping.   I'm going to enjoy the pumpkin season as long as I can.

I used Bols Pumpkin Smash, St. Brendans Irish Creme and Smirnoff Vanilla Vodka, but you can use your choice of pumpkin liquor, vanilla vodka and Irish creme.

Then add:
a dash of cinnamon
a dash of nutmeg
a generous splash of cream
ice for shaking