"And if our God is for us, who could ever stop us?"
-Chris Tomlin- 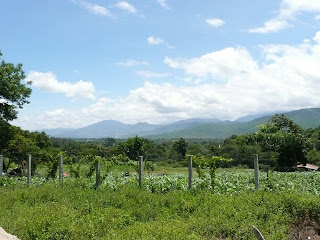 The view from Ana's house
Hard to believe that this time last week we had finished our four days of work on Ana's house.  Equipo A was working in a town called Cacao building a house for Ana and her family.  Ana's dad had lived in the states for a while and saved up money to come back to Guatemala.  He has a fairly big lot.  Currently it's just his house, which is fairly large, including indoor plumbing and a toilet.  Outside, they have a fenced area for chickens, ducks and geese.   We were building on the far side of the lot.  Ana has a twin sister, and the hope is that with Habitat, they may be able to build her a new house right next door.  Our project was out in the country, so not a lot of shops or traffic...I'm sure the lady who ran the small tienda across the street was happy to see us.   Our mason was Oscar.  Oscar has been building houses with Habitat for 8 years and has built over 80 houses.  His ayudantes (helpers) were Jose, Omar and Willian....plus the 10 gringos on our team.   On arrival the foundation and the first two levels of blocks had already been laid, so we got to do a lot of actual construction including: laying block, filling holes with cement, sealing all cracks with mortar, tying rebar and breaking holes into cinder blocks and u-blocks for the rebar.   We also carried a lot of blocks from the house to the build site.   Below are some of the pictures of our progress through the week. 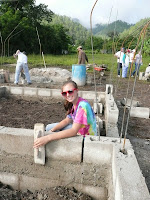 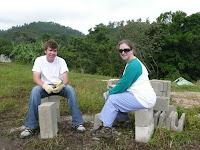 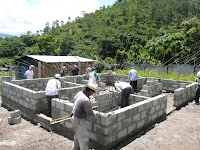 Oscar, our mason, works on the corners 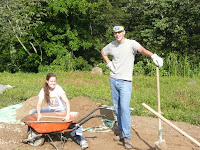 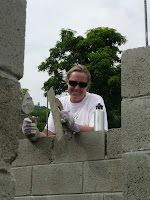 Me in the window 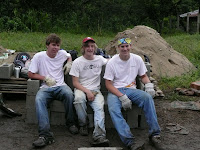 The guys on the cinder block couch 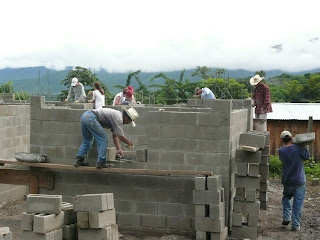 Lots of progress by day 4
Handcrafted for your enjoyment by Jenni at 9:13 PM