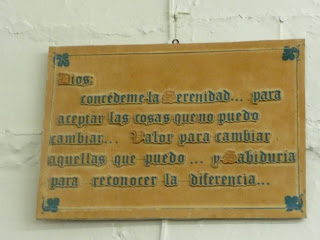 I want things to be right.  If they're not, I want to fix it.  Recently I've been struggling with the things that I can't control (many of them being in Oklahoma, but not all).  I have a particular work ethic and I expect that others have the same.  Sadly, this is not true.  It's hard to make other people care.  Or even respond.

How does this relate to the Serenity Prayer?  The prayer reads:  God, grant me the serenity to accept the things I cannot change, the courage to change the things I can, and the wisdom to know the difference.  Some days, it feels like I'm fighting a losing battle, but that I don't want to give in, because I feel that what I'm asking (or doing or thinking) is right.  I don't have a job that is changing the world (but it is fun!).  However, you never know what impact your actions, simple though they are, might have on another.

Ghandi said, "be the change you want to see in the world."

It makes me wonder if I'm doing what I am called to do.  Or even what that calling is.

A couple of weeks ago at church we watched the video for the song "Hands and Feet" by Audio Adrenaline.  It's funny, I probably haven't heard that song for 6 years.   Since then we've been singing it during vespers at youth group on Sunday nights.  It's a song that makes me think hard about what God really wants me to do with my life.  I have not reached a conclusion, but am open to suggestion!

Handcrafted for your enjoyment by Jenni at 7:07 PM