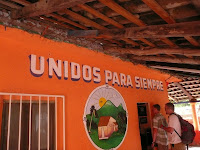 On Friday morning, just like at home, I attempted to ignore my alarm as much as possible. Embracing the Latin American lifestyle includes eating dinner late and being social while doing it. Our first stop for the day was Casa Unidos para Siempre, which is a drug/alcohol housing and treatment center that also benefits from water donations from ADU. Our project, to plant a small garden for the residents to take care of. Many of the residents helped with the project, proving the truth of "many hands make light work." Jon in our group, along with one of the residents both have landscape and gardening and steered us in the right direction. Althea had bought some seed and some plants, including roses, herbs and even purple pepper plants. Althea's son Inigo spent his time chasing Bartholemew the cat around the garden for our entertainment. 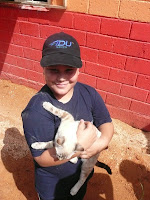 Every place we go, we get snacks, and one of the great treats in Chiapas are the peanuts (cuacuawattes), especially when they are seasoned with chile pepper. 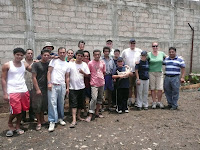 Greg and Ryan wrap up our gardening project with the traditional "machete man hug." 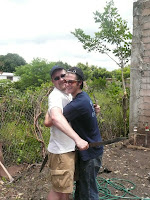 We then went to lunch at La Cruz. I had a chile relleno. Ryan and Inigo got their adventure on and had the cow tongue. Our afternoon fun activity was to go to the waterfall at Aguacero, which is an ecotourism location. We had to walk down over 700 steps to get to the base of the waterfall....and then the majority of us took off our shoes to climb up the water fall, which was fantastic fun. Which was good, since the climb back up had us all feeling old and out of shape. 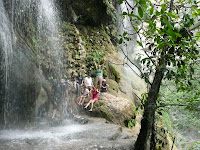 Running joke of the trip: somewhere on Friday Ryan got on Greg for "harshin' his groove." For the rest of the trip we identified all things that could harsh one's groove. I'm waiting to see how many days I'll make it back at work before my groove gets harshed. On the drive back from Aquacera to one of the water plants in Tuxtla we started singing in the car, including songs in a round (such as make new friends). Back in Tuxtla I made a sarcastic comment about one of the collectivo drivers and his excessive amount of stuffed animals in the front of his taxi. What do my new friends do? Roll down their windows and tell said driver that I like his collection. What else to do but smile and wave...
Our dinner was at a fancy Italian restaurant called Il Giardillo. One thing I've noticed in Mexico, perhaps because of the flu outbreak, is that hand sanitizer is offered everywhere. This restaurant went one step further and all the staff was wearing face masks. I had stuffed sea bass for dinner and a plate of churroitos (they were mini after all) for dessert. The highlight though, was the table side presentation of Jon's Irish Coffee. I'd never seen anything like it. They flamed the glass, set the whiskey on fire and poured a flaming shot over the whipped cream.

Cosas Nuevas:
#66 purple chile peppers, #67 getting a purse rack at a restaurant, #68 adding "harsh my groove" and "puttin' peace / love on" to my vocabulary
To see what my partners in crime thought about their experience in Mexico:
Greg www.blogadegregorio.blogspot.com
Shane www.shanesthoughts.wordpress.com
Margaret Mead once said, "Never doubt that a small group of thoughtful, committed citizens can change the world. Indeed, it is the only thing that ever has. " It would be more accurate to say "a small group of thoughtful citizens wearing blue shirts....." 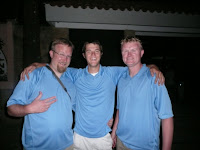 Handcrafted for your enjoyment by Jenni at 7:54 PM