Wednesday was quite the adventure in travel, and I won't bore you with the details, but needless to say I spent more than enough time in the Mexico City airport (with time to have chili/lime chips and Mirinda, and to know that my new cell works in Mexico). I'm spending a few days in Tuxtla Guitierrez in Chiapas, Mexico on a transformation trip with Aquas de Unidad (aka Healing Waters en ingles...). There are four of us, plus Gregorio, our fearless leader from Colorado. Althea, the communications coordinator, and her family have been our primary hosts taking us around to different purification plants in churches and the charities they support with donated aqua purificada. 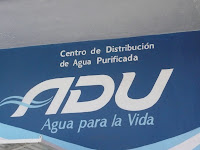 Yesterday's activities included the water purification plan in Coita and then we spent the rest of the day at Cosa Hogar Infantil. It's an orphanage in Coita that is supported by ADU with clean drinking water. They grow corn, peanuts and beans as well as raising pigs, chickens and goats. It's summer so some of the kids are with family and friends elsewhere, but we did some painting in the boys dormitory (racing stripes anyone?) and then played with the kids. We played Uno, basketball (instead of horse, we played "perro"). 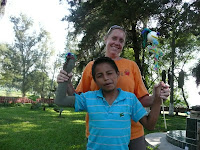 My proudest moment? With Hrothgar's help I was able read a 4 page kids story about a pig's curly tail (Donde esta mi cola?) with the kids using their puppets to act out the parts.
Below is a picture of our team on the roof of one of the buildings at Casa Hogar. 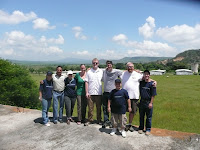 But the fun doesn't end there! After a chance to shower and rest back at the hotel, we were off to dinner....with a detour. Don Juan (Jon) had heard from his taxi driver about "Marimba Park." Every night there is a marimba band in the square. We stopped there and almost immediately Ryan says, "Jenni let's dance." So yes, I was dancing by the gazebo with the tall gringo in the blue shirt. After that (much to her embarassment), Elspeth (who's sixteen) got her bailar on. Then, just for fun, Ryan asks a random local girl to dance and they hit the floor. It was vastly entertaining and the crowd was into it. It was one of those real, authentic experiences that you can't plan, but that makes your experience that much richer. 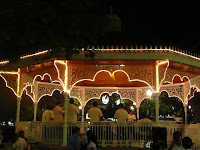 Our evening concluded with dinner (as all good evenings should) at La Carreta. The queso fondito was delicious and I had tostadas tuxtletas, which was a ground chicken ceviche. There was live music...including Spanish covers of "Only You" and "New York, New York." No trip to Mexico is complete without helado, so we did a quick drive by to the OXXO to get some ice cream bars on the way home. Shockingly, that was my only ice cream on this trip. I did make up for it by eating multiple churros, though.

#61 tamales for breakfast, #62 meeting someone who has been called to be a priest, #63 visiting an orphanage, #64 dancing to a marimba band, #65 learning how water is purified

Handcrafted for your enjoyment by Jenni at 6:51 PM