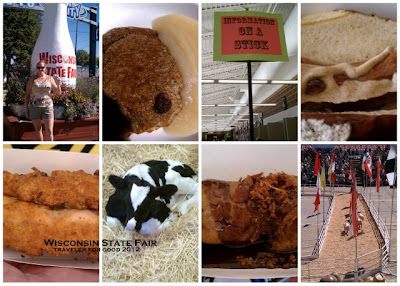 I grew up going to the Rock County 4H Fair each summer.   As a child I wanted to eat cheese curds and eclairs.   I wanted to watch the ducklings go down the slide into the water.    I wanted to ride the Tilt-A-Whirl and the Scrambler.     As a pre-teen, I wanted the "Moonlight Madness" wristband to go on the rides endlessly with my friends.     The fair was where I saw Tiffany in concert.

The Wisconsin State Fair sets the bar really high for state fairs.   I remember going to the Indiana State Fair as an adult and being saddened by the fact that it was a dry event and there was not an adult beverage to be had.      The Colorado State Fair is two hours away in Pueblo.   I realize my state fair experience is limited to these three, so I'm going to claim that of state fairs that I have visited, Wisconsin's is the best.

Food on a stick is the theme at all fairs these days.

Food vendors ask themselves these questions:
Will people eat it?
Can I fry it?
Can I put it on a stick?

If the answers are all yes, you have a new fun fair food.

Some of the items we tried at the Wisconsin State Fair included:  root beer flavored milk (it is Wisconsin after all), crab cakes on a stick, fried stuffing balls on a stick, pot stickers on a stick, potato pancakes - NOT on a stick, fried cheese curds, beer floats, Leinenkugel's Summer Shandy and Berry Weiss, fried bacon, the Fat Elvis (deep fried peanut butter cup in a banana coating with bacon on top) and a pulled pork sandwich inside a Bismark.

What is your favorite fair food?

﻿
Handcrafted for your enjoyment by Jenni at 9:25 PM