Greece Starts with a Healthy Breakfast

Hi Friends!   This is a banner day for The Pursuit.   I started this blog in 2008 primarily to write about travel and in preparation for my trip to Thailand in the spring of 2009.   Today you are reading my 500th post!   I know I've enjoyed the adventure and I appreciate friends, family and complete strangers (but you love travel and food, so you're not a real stranger) following along.    It's a cold and dreary Saturday morning in Denver.   We don't get a log of dreary here, so I'm taking advantage by getting caught up on posts about Greece and Turkey.    It's like leaving on vacation again.  Kind of.  Except I have to go back to work on Monday and I'm not having full fat Greek yogurt and bacon for breakfast.    Grab yourself a cup of coffee and lets go!﻿ 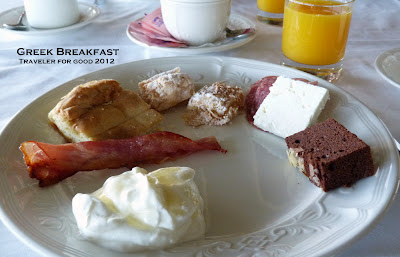 This was my first breakfast in Greece.   Fresh orange juice.   Greek yogurt with honey.  Pastry.  Slabs of feta.  Bacon.    Start as you mean to go on.   Two weeks of no holes barred enjoyment.﻿

We had a half day city tour on April 9, our first real day in Greece.   The main feature of the tour was the Acropolis, and that will get its own post and photo montage.   Greece is well known for being the home of the Olympics.   The Olympics of the modern era started in 1896 in Athens.    The stadium is the finish line for the modern marathon.    The legend of the marathon race was that a runner messenger was dispatched from the city of Marathon to Athens to announce that the Persians had been defeated in the Battle of Marathon.   He got to Athens, approximately a 25.4 mile run (going the hard way to avoid being caught), and then collapsed (and possibly died) from exhaustion.   I know that I would collapse from exhaustion too...my theory on running is that I only run if someone is chasing me. 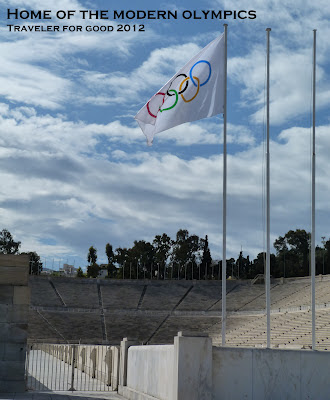 That marathon runner has been immortalized in this great sculpture that shows the runner in motion. 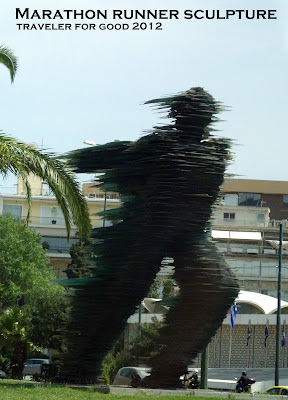 Handcrafted for your enjoyment by Jenni at 10:12 AM