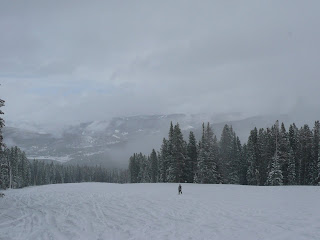 Many things this past week have been ridiculous. Mostly in a positive way. Items that were ridiculous in a negative way will involve fog, traffic or temperatures below zero. First was the weather. We had 3 days last week that were around 70 degrees. I think that's perfect weather in January. Then was my birthday dinner with magnificent mojitos. Followed immediately after with a fun ski weekend in Breckenridge. The fog on the drive up: ridiculous. The house for our ski weekend: (as the guys would say) "ridonkulous". The snow resulting in powder skiing. The infamous green chile. Playing "Celebrity" - an elaborate 3 round game of charades that involves actual Charades, Taboo, and 1 word clues (using words/phrases such as: cornice, the industrial revolution, and Mama don't let your babies grow up to be cowboys). Watching 80s videos on VH1, specifically seeing Whitesnake's "Here I Go Again". Sunday afternoon skier traffic. Having dinner with a friend from my freshman year of college. The dramatic transition to freezing weather, ice and snow in town.

If it's ridiculous, I'm in.
Handcrafted for your enjoyment by Jenni at 8:55 PM