Most of the time, I write and post pictures of the places I have been.
In fact, it's hard to have your own pictures of a place you've never been.

And then there is Santorini.

Today I saw this picture in my news feed.
Imagine.    48 Hours in Santorini. 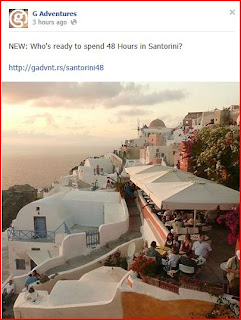 Santorini is a big deal for such a small island.   35 square miles small, to be
exact.     The blue domed churches on the island are some of the most photographed in the world.   Everyone who has been to Greece says "Don't miss Santorini."

Here's one of my pictures from a place I've never been:  Santorini 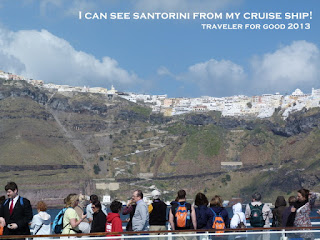 We were close.    We could see the idyllic villages and churches.   A glass of wine while watching the sun set over the Aegean Sea was almost within reach.
It was a beautiful sunny day in the Greek Isles.   Nothing would stand in the way of our entire ship enjoying the magical beauty of Santorini.
Except high winds.    Winds closed the cable car.   Winds stopped the tender boats from coming to get us.   High winds caused passengers to cry when the voice came over the loudspeaker telling us that we would not be disembarking on Santorini.   That we were, in fact, going to turn away and head back to the port of Pireaus in Athens.
Next time, Santorini.
Next time.  ﻿

Handcrafted for your enjoyment by Jenni at 9:59 PM