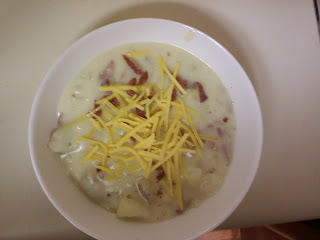 I mentioned potato soup to my trainer - and even though this recipe is from Cooking Light - it did not get his approval because of the potatoes.   It turned out well and I will definitely make it again...even if it does get circled in my food journal.   The recipe is in the 'super fast' section to be made in 20 minutes, but I let it simmer on the stove for a bit after adding the potatoes and sour cream.   I also doubled the recipe from what was in the magazine.    The recipe below is the original from the magazine.

Pierce potatoes with a fork.  Microwave on high 13 minutes until tender.  Cut in half, cool slightly.
While the potatoes cook, head oil in a saucepan over medium-high heat.  Add onion, saute 3 minutes.  Add broth.  Combine flour and 1/2 cup milk, add to pan with 1 1/2 cups milk.  Bring to a boil; stir often.   Cook 1 minute.  Remove from heat; stir in sour cream, salt, and pepper.

Arrange bacon on a paper towel on a plate in the microwave.  Cover with a paper towel; microwave on high for 4 minutes then crumble bacon.

Discard potato skins ( this was extra work - I kept most of the skins on ).  Coarsely mash potatoes into soup.  Top with cheese, green onions and bacon.  I also used spicy red pepper and hot sauce to give the soup a little kick
Handcrafted for your enjoyment by Jenni at 10:47 PM